This is a rare opportunity to acquire a previously owned A330/A340 combined Door Trainer (DT) and Cabin Services Trainer (CST) at a fraction of the cost of a new build unit. 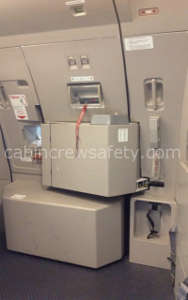 Manufactured in 1991 this A330 CST/DT Representative Training Device (RTD) is mechanically in excellent condition and is a fully manufactured representation using no obvious original aircraft components.

The A330 DT/CST is understood to feature :

The RTD is fully operational and has been in used until it was recently removed from the training hall where it became surplus to requirements.

The RTD is offered without warranty and has only been visually inspected in its operation and general condition.

It should be noted that the control system operates on a legacy Microsoft Windows* platform that is no longer supported by the original manufacturer or by Microsoft*.

Full electrical and mechanical documentation is supplied with the RTD. With this information the new owner should be able to continue to maintain the originally installed equipment or implement partial or full upgrade within the RTD.

* Microsoft and Microsoft Windows are trademarks of Microsoft Corporation.

It's easy to sell your retiring cabin training equipment.

Legacy representative training devices can be an asset that can recoup value back into an owner/operator training budget. Cabin Crew Safety offer a complete sales and shipping service and will advertise your surplus training equipment to a worldwide audience at no cost, as well as handle all enquiries and qualification of potentially interested parties.